AccountingSuite is mostly accessed from web browsers, and for us the ability of Taxi to work without browser pop ups (modal windows), so users don't need to disable pop up blockers, was key.

The other very important feature of Taxi - improved design and user experience were very important since they brought the application interface to modern standards and increased user satisfaction.

We performed several steps to migrate AccountingSuite to Taxi which are described below.

1) Since 1C:Enterprise 8.3 / Taxi has an integrated search UI we removed the search module used before (from 1C:Subsystems Library).

2) We also replace the Delete Marked Objects module from 1C:Subsystems Library to the one that was included in the Managed Application provided with 1C:Enterprise 8.3.

3) AccountingSuite had relatively few (about 10) code fragments that had to be rewritten to enable the "modality usage: do not use" mode.

For example this code fragment used to open a modal window, was replaced using the new NotifyDescription mechanism:

This resource explains the NofityDescription mechanism in working with modal windows in more detail: http://v8.1c.ru/o7/201301nm/

4) Other methods that were using modal windows were replaced with new versions that work without modal windows:

5) Interface optimization. Taxi is designed to work well on both tablet browsers and PC browsers, meaning that the elements are bigger to allow touch interaction. We have to rearrange document UI to make sure all information fits on the screen, and there is comfortable space in the tabular section of the document. The summary of the optimization is on the screenshot below: 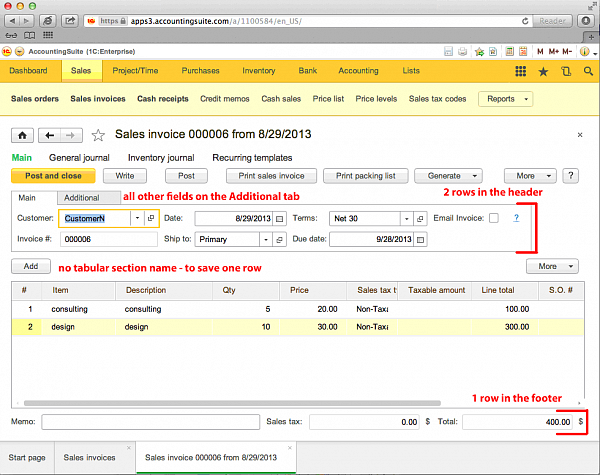 6) We widely use new Taxi UI elements, such as tumblers and collapsible sections, as they help to organize elements in a visually appealing way:

Overall, for AccountingSuite transition to Taxi was very smooth and fast - our development teams spent no more than a week to implement all of the above features. This investment more than paid off by increased satisfaction of existing users and higher interest from prospects.